I figured just like with digital cameras, in a consumer product you can't remove all susceptibility outside the visible spectrum, just have several stops of difference in sensitivity.

R72 Filter used, +14.5 stops of 'filter compensation' to get this effect, or EI 0.017 from a ISO 400 film (I should mention this included 2 stops of reciprocity correction, but its just guess work at this point).

I was considered lowering the pH level of the C-41 developer to effectively underdevelop the reds, but the reds dont seem that dense as I suspect they would be, they seem quite godo, but the green and blue channels have a thin density range.

Needs more exposure, with a green and blue filter, would probably help a bit.

Defniately seems to be an IR effect their to my eyes.

Scanned with levels set on each colour channel to not have any clipping at all, then auto-levelled to provide a 'balanced' image (regardless of false colour) to see the effect.

Test #2 will include the colour filters and increased exposure.

A high contrast film may be much better for this, less expansion of green and blue would be needed, hence less grain contrast, and less shitty scanner noise, perhaps Velvia etc. 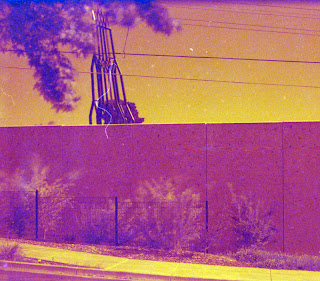