Fuck me, this is going to be a rant, and a warning (hopefully) to others about using The Post Lounge (http://www.thepostlounge.com/) for telecine transfers (example at the end)
Just got out S16mm HD telecine back that we got done at The Post Lounge at the warner studio lot and I am angry.

Originally it was $450 for our HD telecine for the hour, uncompressed 10-bit onto a drive we supplied, and get it back same day.

Anyway, they notified us like 2 days before they were increasing the cost to $1000 iirc (and we ended up only in there for 20 minutes), which included postage (postage was like $250) to their Brisbane office so they could capture the tape.

They also notified us that they were scheduling us an hour earlier (hold - we're paying for it and booked our time - and now we're paying over double for it, for a worse end result, and we have to do it to their terms when they know how far we have to drive up to supervise?)

We didn't have have a choice to send it anywhere else after that, since it was already up there for processing and then delivered to the place for our arrival to supervise the telecine (nice and sharp on the raw telecine, soft as a soggy kleenex once we got the footage back). We were also asked "where's your film?", they had to go chase it up after we reminded them that it was delivered to them directly from the lab (which is the usual case), that's not really even an annoyance or concern for me though.

Which sucks, what I'd like to point out at this point, is when we got the footage back, I noticed that the gamma and white points the operator had set, suit when the camera is spinning up or spinning down (which exposes the negative more and hence increases overall density) and not when the camera was at speed (in our case, 25 fps), so the white point has been set for the brightest highlights 2+ stops above our useful footage.

A fucking monkey pressing an auto-levels button could do that, why the fuck would you pick the sections where you turn on and off the camera (which have the greatest highlight density) to set the white point to?!

Now if we were getting the uncompressed footage, this wouldn't be a problem, may even be not so bad with HDCAM SR, but that simple fact means we have vastly less information/bit distribution etc for our useful footage, he may as well have just run an auto-levels over the entire lot of the footage in one go and set black to minimum neg density, and white to maximum neg density.


Oh, and the footage went through a second stage of lossy compression during capturing at the Brisbane location, which just makes it worse.

What it means, is twice the cost, for an inferior service and end product (soft, noisy, simple grading after levels correction causes banding), and a wait of a week, instead of same day.


So, apparently, they no longer have the facilities to do a transfer at their Gold Coast presence (and the packaging they put the drive in must be made out of gold foil to justify the $250 postage price for the drive).

So I would just like to put that out there in case there happens to be even one of you out there on a production considering getting a telecine done on the Gold Coast - I'd say to you, consider if that suits your needs, and if it does, I'd say it'd be cheaper and less time consuming to shoot on HDV. If it doesn't - look elsewhere, courier to Sydney etc (will cost a lot less too).


Verdict: Shameful service, just because we're only getting 400 ft of film done doesn't mean they can neglect our service, put a lovely tax on us (over twice the cost in total including $250 for postage over a distance of 100km?!), do a fucking shameful job, and after charging us over double compress out footage down using a codec with a shitty bit-depth and nasty chroma-subsampling with an anamorphic aspect ratio (throwing out resolution) that is 13 years old to tape only to be captured and lossy compressed again.
Do you even give a fuck about your business, or the job you do and quality of service you provide?

Here is one example of a typical well-exposed scene at EI50 (Even if it was underexposed, which it wasn't, a normal telecine operator would sit correct it and set the white point, gamma and black points), and the version after that I simply set black and white points on, not even touching gamma, gosh that was such hard work! 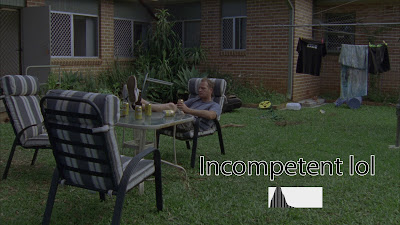 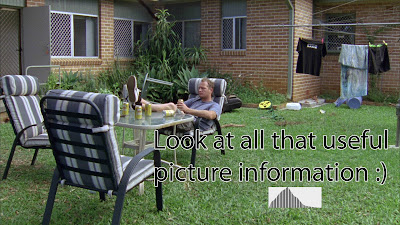